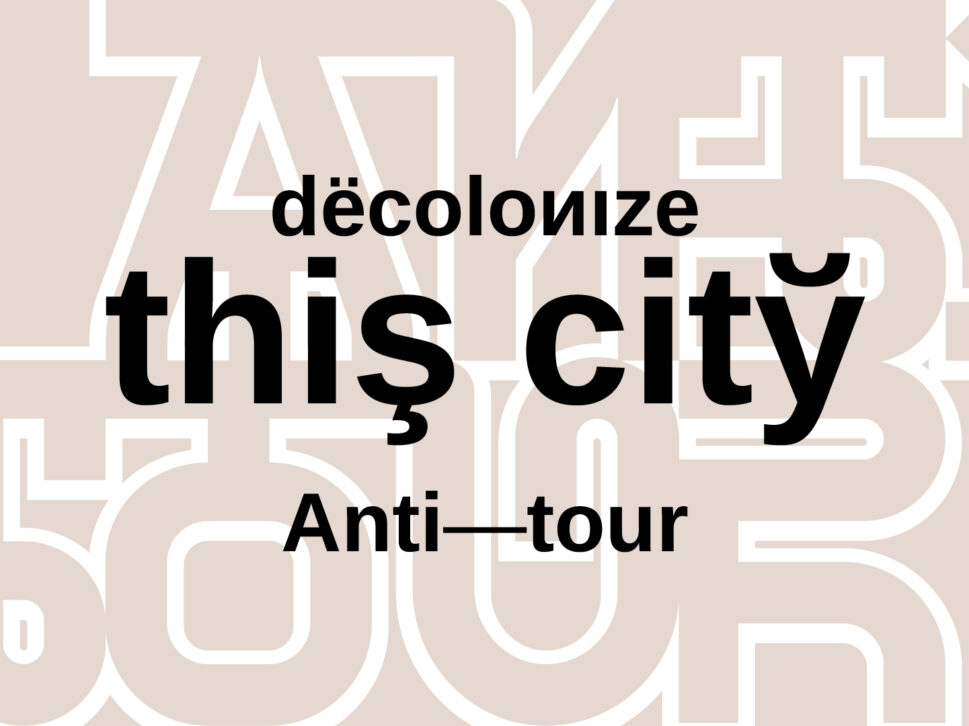 The anti-tour Decolonize this City, developed by students, faculty and researchers of the Department of History, Archaeology and Social Anthropology at the University of Thessaly, is scheduled to be presented in Volos on Sunday, February 20, 2022.

Given that the need to decolonize “this city” (Volos or any other Greek city) is hardly a given, either for people who live there or those who have studied the city’s history, this anti-tour has a twofold aim: 1) to trace some of the multifarious ways in which the establishment of the modern city of Volos in the mid-nineteenth century interfaces with genealogies and geographies of European colonialism and 2) to spark conversations about why re-viewing this history matters today for how we live together with (human and non-human) others, and how we might work toward shaping a more inclusive and habitable future.

The anti-tour will focus on the temporal and spatial emergence of the new city of Volos — or, to be more precise, the “New Stores” (Kainourgia Magazeia), which by default transformed the existing city and market area into the “Old” (Palaia) Stores/Quarter. Developing this new social and economic infrastructure and cultural habitus depended on the (still ongoing) work of literally and symbolically destroying, vanishing or ignoring traces of the region’s Ottoman past. 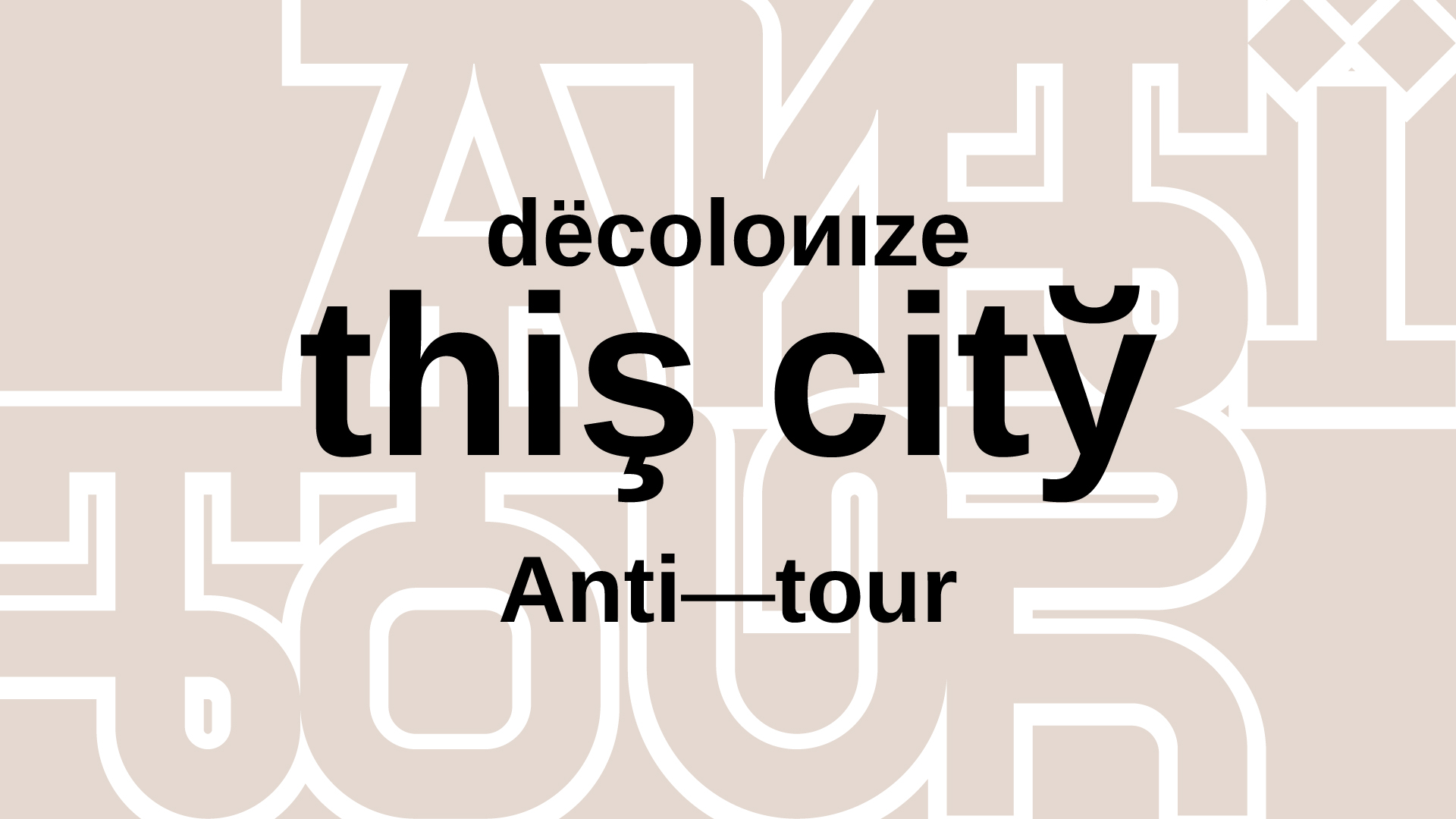 The decolonial frame will productively dis-orient a more familiar narrative of modernization, urbanization and Europeanization as an inevitable and mostly positive progression. Some of the topics we will take up have been extensively researched in the local context (histories of the railroad, urban planning and other infrastructures), while others have barely been examined (history of archaeology, culture of hunting and shooting). To bring to the fore issues such as ethno-religious cleansing, land grabbing, resource and knowledge extractivism, anthropocentrism, infrastructural violence, white supremacy, speculative capitalism, necrotechnologies and others will require unsettling deeply embedded and naturalized colonial technologies, disciplines and institutions: the clock, the map, the museum, nature, the human, race, the railroad, archaeology, hygiene, the gun, photography, history, the nation.

Our aim is not present an “alternative” history of an already historicized world, but to work through what it means to think about historicizing itself as a quintessential “imperial gesture” that has “erase[d] and belittle[d] existing diverse worlds, now relegated to the past and standing in the way of imperial progress” (Azoulay 2019). Our aim in other words is to disrupt the habits of history - to break the vitrine, by tracing the colonial afterlives sedimented in the monumental landscape.

Toward that end we are experimenting with the anti-tour as a practice of grassroots pedagogy and mode of public intervention and, thus, a promising decolonizing methodology. Given that the history of “touring” is part and parcel colonial legacies of mobility, access, ordering knowledge and commoditizing the past, we will employ this format in a deliberately ironic and deconstructive way. As a brief performative occupation of public space, the anti-tour is a gambit to open a space of encounter, sharing and collective thinking about the violence of the past and the present, on the streets of our city today.

A few words about origin stories 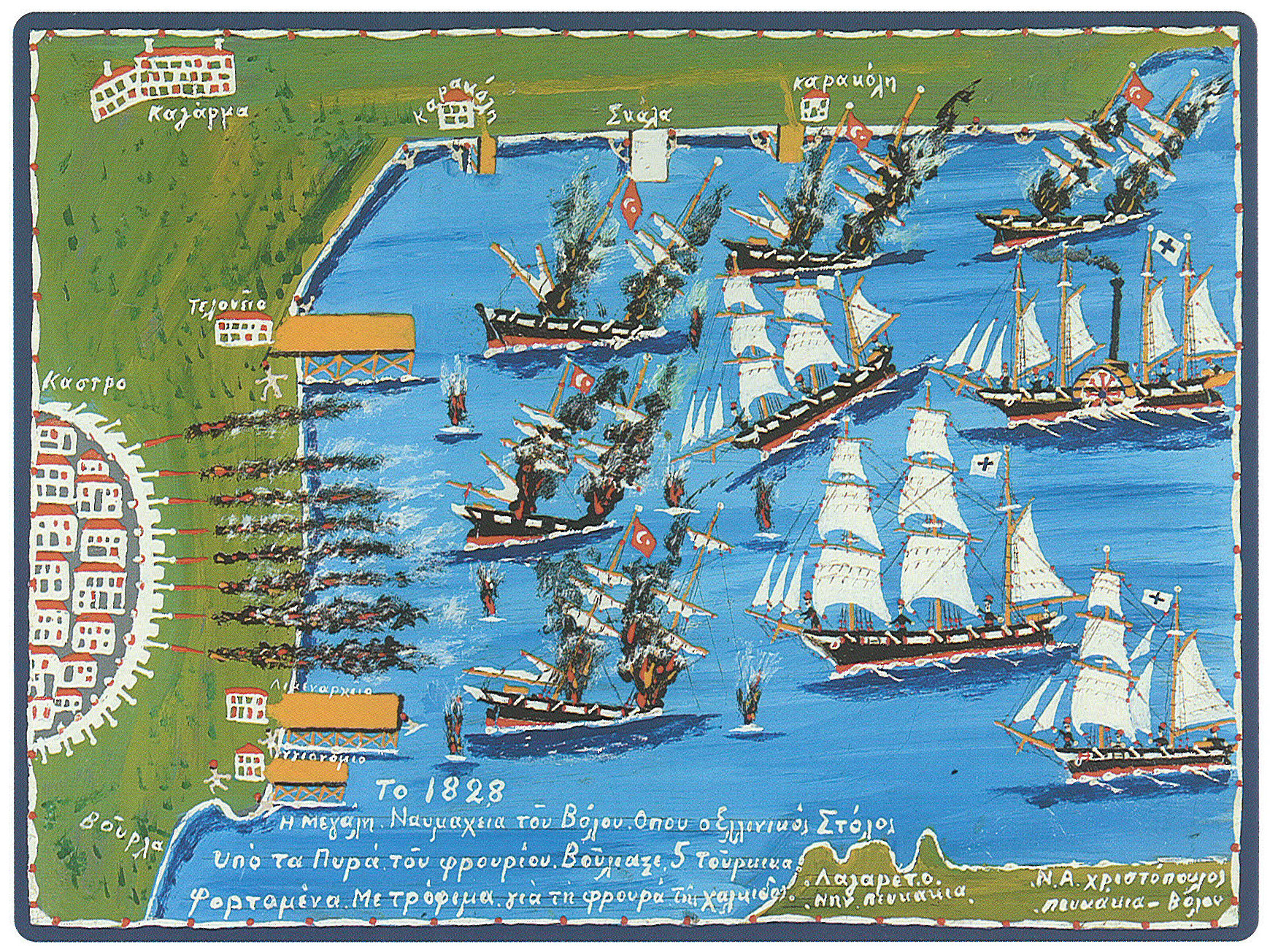 From the 1840s onwards, businessmen with capital, mainly from the Pelion region, who identified themselves as the first settlers of the city, began to promote their financial interests through the port of Volos, contributing to the construction of New Stores/New Polis, east of the Old/Ottoman Stores/Quarter. As the city grew, the need to locate an adequate (non-Muslim/Ottoman) origin story became imperative. Employing historicist disciplines - historiography, archaeology, linguistics, philology - the digging around in the ground and in texts, ongoing to this day, would begin: whether for ancient Iolkos (and the myth of Jason and the Argonauts), byzantine Dimitriada or Greek Orthodox Pelion.

What, though, if we started the story of modern Volos in April, 1827, during the Naval Battle of Volos. At that time, the world’s first steam-powered warship - the British-built Perseverance - bombed the local Ottoman castle. The newness of Volos from that moment on would be dependent on the violent obliteration of any connection to a centuries-long shared Ottoman past. Meanwhile, the Karteria - the Greek translation of the “perseverance” - could be seen as a vessel of Hellas itself: namely, a mode of becoming part of Europe through western idioms of Greekness and nominal sovereignty. Purchased with funds from the second British loan (1825) to the Greeks during the War of Independence and commandeered by a discharged British navy officer Captain Frank Abney Hastings, the Karteria could be seen as a forerunner to countless western weapons sold to Greece on behalf of its freedom.

While the Naval Battle of Volos would not prove a catalytic event in the struggle for independence in the region (indeed the province of Thessaly where Volos is located would not be annexed until 1881), the demo of this novel killing machine in the Pagasetic Gulf did shock the local aga Tafar Bey. Dubbing the Karteria a “seitan vapor” (devil ship), he is reported to have exhorted the inhabitants to flee from the back gate of the castle, inland toward Larissa. He feared that the ship’s paddle wheel the ship would enable it to come ashore and continue its shooting spree. Greek histories of the city by local elite do not neglect to poke fun at his supposedly naive reaction to technological “progress.”

Image: Painting of the Naval Battle of Volos by the folk painter Nikolaos Christopoulos. The Karteria is the boat with the paddle wheel, on the right.

Why is this colonial? 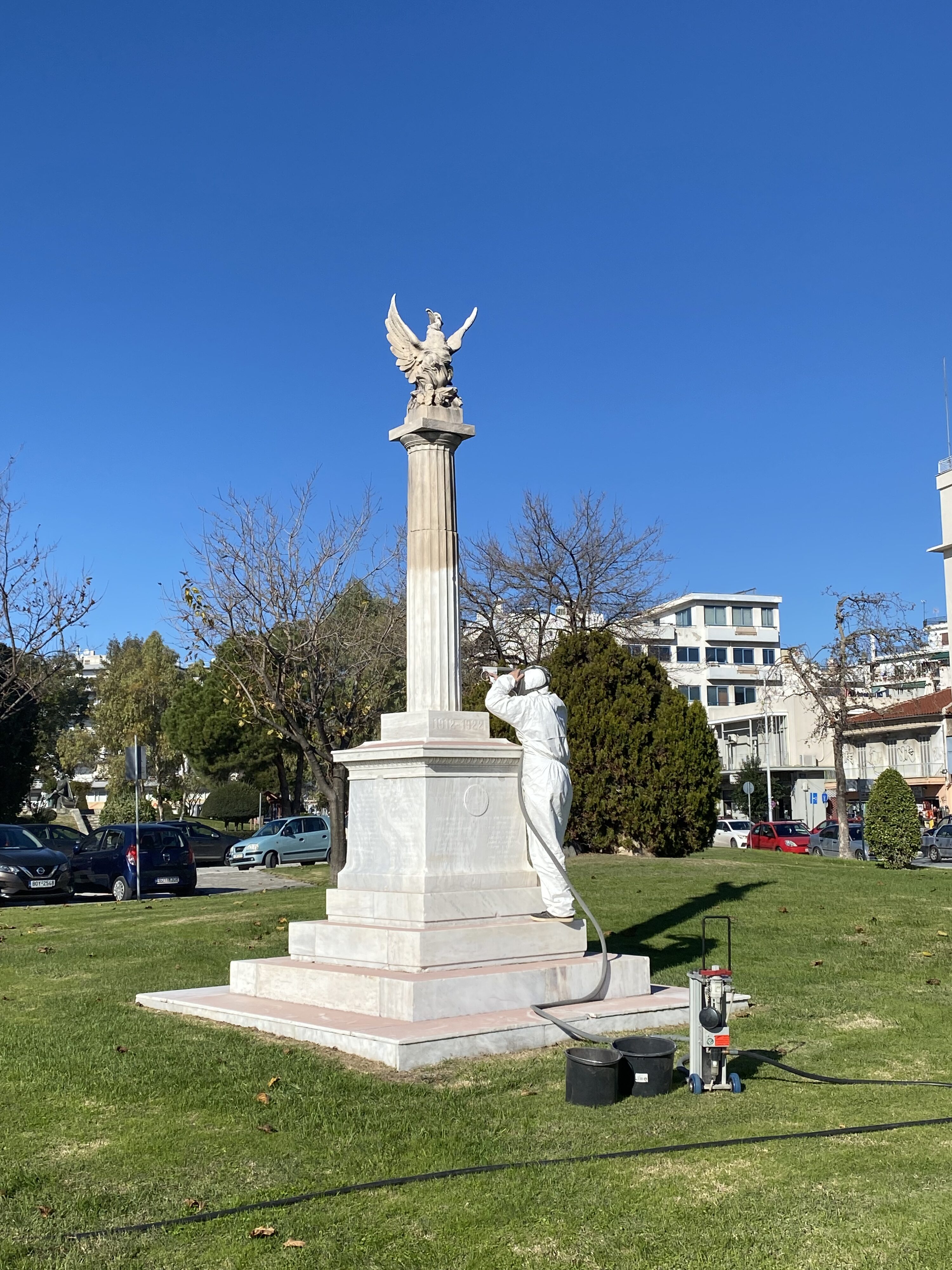 As the Ottoman Empire gradually weakened and collapsed, European powers - British, French, German, Italian - made their political, economic, and military presence felt in the new Greek state. Yet, despite ample evidence to the contrary (the French Morea Expedition in 1828 and 1833, the Bavarian monarch installed in newly independent Greece in 1834, the British colonial possessions of Ionian Islands from 1815 to 1864, the occupation of the country by Italian and German during World War II, the U.S. support of the military dictatorship (1967-1974) - and the list goes on), there is resistance to “seeing” the colonial in the Greek context: whether because of this collective and yet piecemeal Euro-American intervention, a nominal sovereignty camouflaged by the European “debt” to ancient Greek origins, or the relative “mildness” of European violence in Greece relative to the “real” colonies.

There is even more resistance to tracing the inculcation and mimeticism of Western “values” (white supremacy, Islamophobia, bourgeois culture, ethnic cleansing, irredentism, historicism) and recognizing the benefits accrued from white/European privilege.

In our anti-tour, we focus on how colonial imperatives, practices and worldviews become one with the very idea of a “city”: as a forceful spatial reorganization of social relations, movements, bodies and memories, as a ‘time machine’ propelling the values of newness, progress and acceleration and as a site of material instantiation of culture and aesthetics.Across our case-studies, we will identify certain aspects of this process of “building a new city” as critical to how European colonial power works, as well as to how it hides its violence.

Unlearning these practices and processes is what we mean by decolonize. Our anti-tour happens to focus on Volos -- but we encourage you to bring this perspective to a city near you soon! 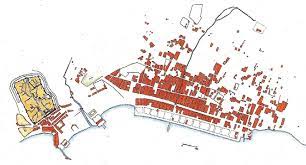 This section will concentrate on the destruction and reconstruction of parts of the Old/Ottoman Quarter of the city, still referred to today as Palaia in the name of public health and sanitation. After 1423, when Thessaly came under Ottoman occupation, the Ottoman city developed within the Byzantine-period city wall with densely-built houses and narrow streets, surrounded by a moat, a mosque and synagogue. Outside the fortification, to the South, there was a small commercial zone, which included shops, a bazaar and the customs office. The establishment of the New Shops - Kainourgia (Magazia), a term no longer in use, with a Cartesian “grid” of streets, would see the construction of new Greek Orthodox churches, a Catholic church and others monuments of modernity (Archaeological Museum, Hospital) and technological infrastructures (gasworks, electricity, sidewalks, tree planting), which depended on European expertise, equipment and personnel. Often, as in the case of the gasworks which were built on the site of the Muslim cemetery or the Archaeological museum built above a Christian cemetery, as well as the changing of Ottoman toponyms to ancient Greek ones, these developments imply a settler mentality to the land as a terra nullius by the self-proclaimed founders of the “New” Polis who produced many historical accounts, both formal and informal.

This section will focus on the construction of the Thessalian Railways, the charismatic figure of the Ottoman Italian Evaristo de Chirico, father of the painter Giorgio, who developed train systems in other parts of former Ottoman empire, European finance capital for these projects and impact of development of trade networks, land grab and real estate, new conceptions of time and space introduced (the first clock and punch-clock), of work (French language as a prerequisite for employment, “meritocracy”, labor exploitation and strikes), social hierarchies (Royal Wagon, still stored on the premises, 'classes’ of passenger), new conceptions of nature (seen from the window, holiday trains to bains-mixtes).

The section centers on the introduction of hunting and shooting in Pelion/Thessaly, as a window, on the one hand, into the development of cultural distinction and new ideas of the body and gender identity through clubs and sports and, on the other, the development of colonial relations of the human to the environment, based on violence, mastery and a destructive anthropocentrism, necropolitics and gun culture. It is important to note that until the annexation of Thessaly in 1881, this region had the character of a frontier of the expanding Greek state. We will consider the establishment of the first hunting club in Volos (by an Italian), the expansion of hunting/shooting as sport (involvement of British Fleet in Volos harbor local competitions and Greek participation in “Mediterranean Games”) and connection to founding of other sporting associations and early hiking clubs, the relation of guns (Austrian Mannlicher, used by Greek army in the Balkan Wars and the Asia Minor Expedition and then turned into a hunting rifle) to other necrotechnologies (the first steam-powered British battleship Karteria bombed Volos in 1827) and the establishment of enclosed hunting preserves (Sklithro near Larisa, Yioura island off Alonnisos with wild goats), practices of taxidermy and participation in hide/fur industries and intersection of all of the above with the intensification of local social hierarchies and elite “European” identity.

The last section will critically examine the recruitment of the discipline of archaeology, as well as the emblematic use of the antiquities for local identity-making. The first archaeological excavations in the region were conducted by Europeans. The violent extractivist practice of archaeological excavation and select photographic capture and museum exhibition of objects deemed exemplary works of (western) art by Greeks would go on to a central role in expropriating the land within a European matrix and erasing Ottoman/local meanings and histories. The changing of Ottoman toponyms to ancient Greek, the erection of modern statues based on ancient Greek mythical figures, the use of neoclassical architecture for buildings embodying Western political, economic and cultural ideals (conservatory, banks, telegraph, municipal buildings), the search for ancient Iolkos and Jason’s “sandal” inculcated European discourses of Orientalism, Islamophobia and racial superiority. We will attend to the role of the many “donors” to the city  - Greek migrants from Pelion (Zagora, Portaria, etc.), who brought back wealth accumulated in Egypt (cotton, banks) along with culture of European/white supremacy (clubs, maids), funded “temples” of modernity - the archaeological museum and the hospital, both constructed in neoclassical style - and continue to be commemorated as benefactors of the city/nation, as reflected in street names in the city. Finally, we will consider how western constructions of the ancient Greek past have been used more broadly to support white supremacist ideologies through the case of the Neolithic Megaron, excavated during the Nazi occupation of the region, and Nazi instrumentalization of falsified data related to this site. 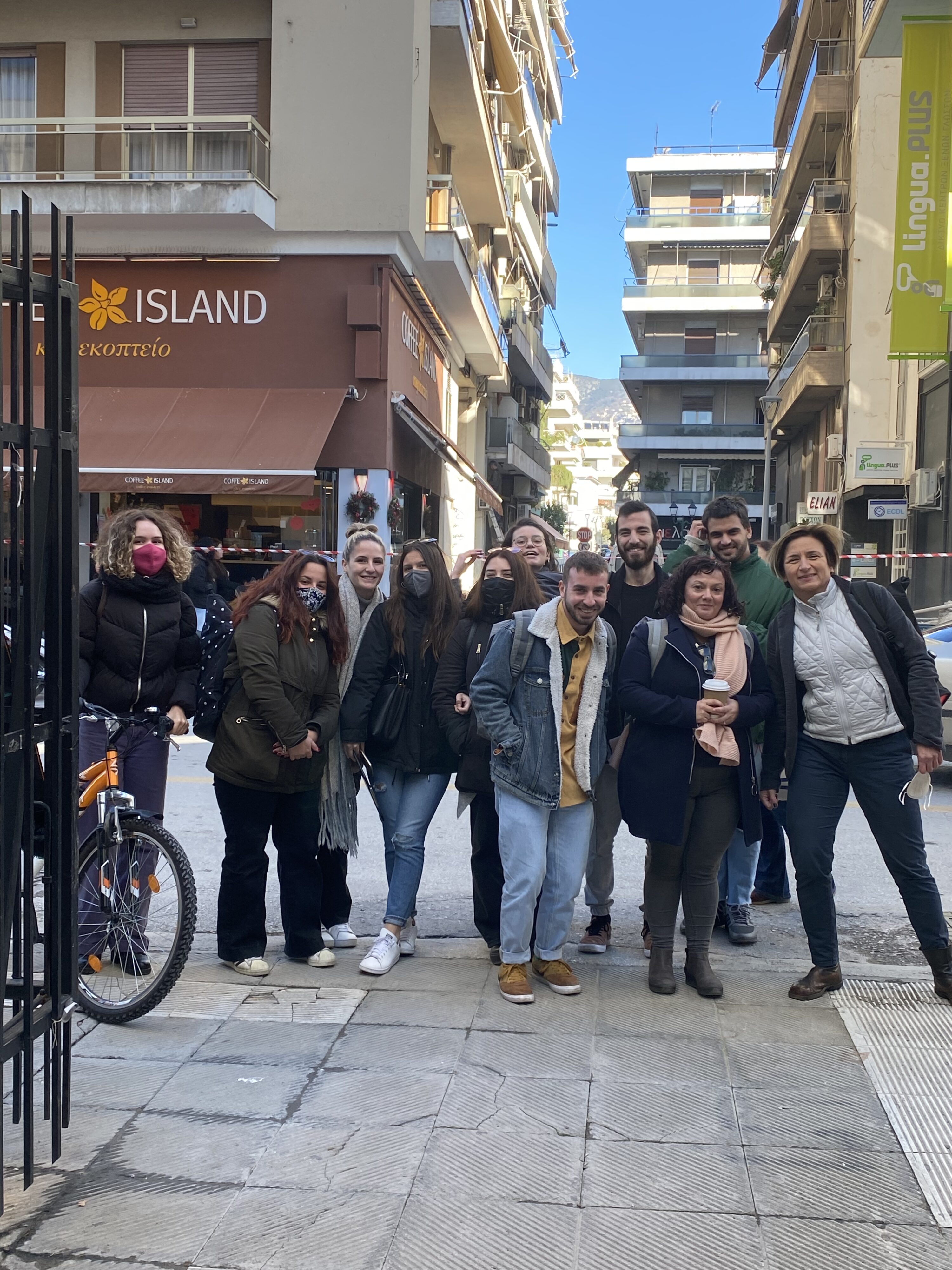 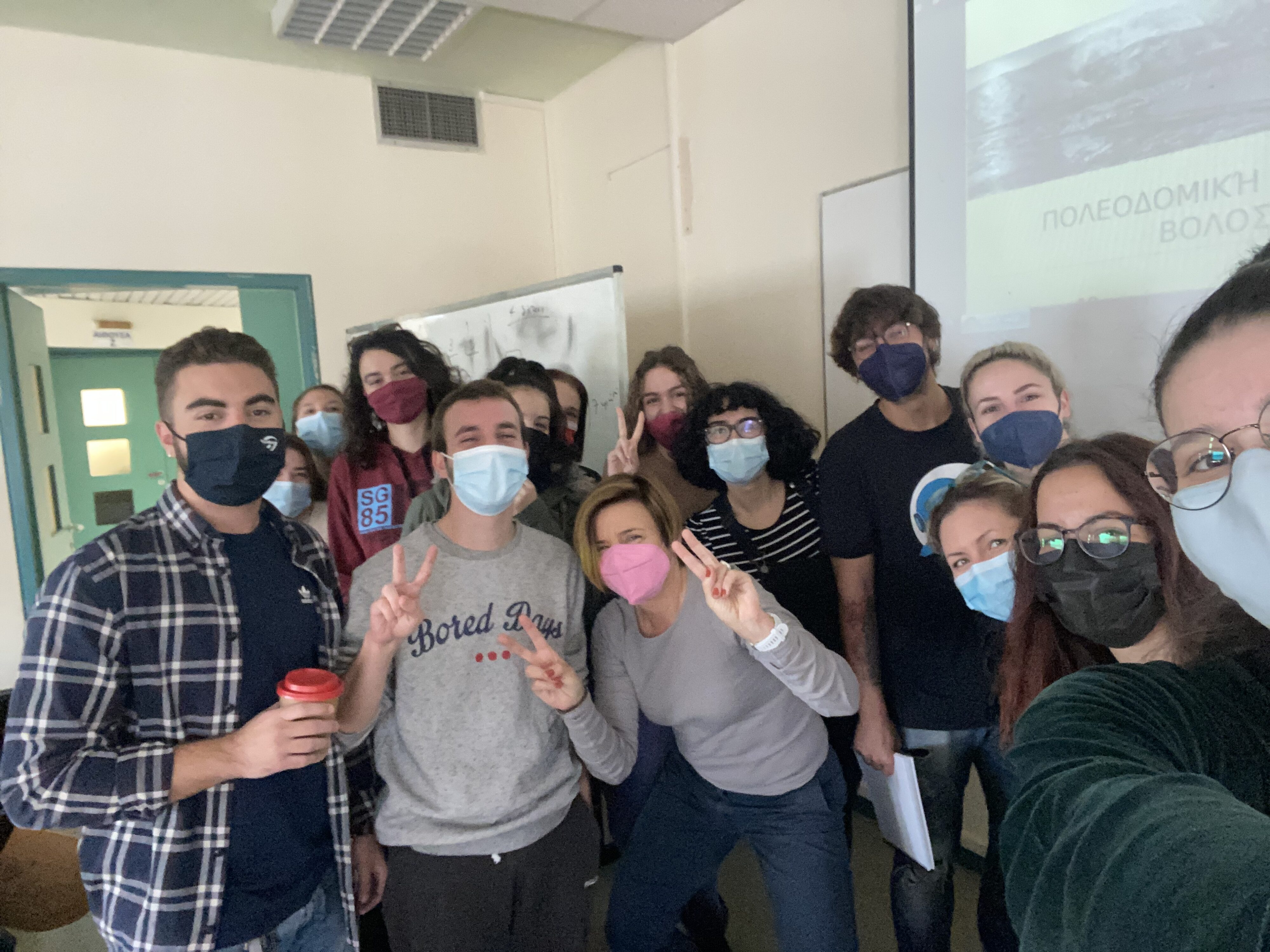